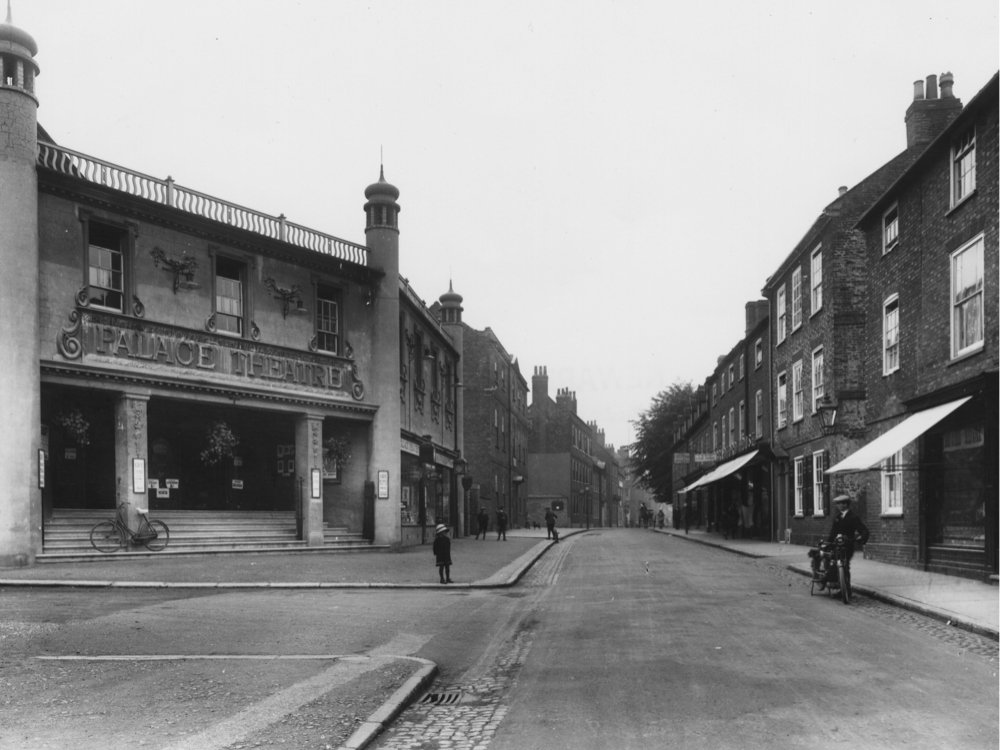 A photo of Palace Theatre Newark, circa 1923; three years after opening.

The Palace Theatre Newark opened in 1920 and is celebrating a century with a variety of events in 2020.

On Monday 5th July 1920, the venue opened as a picture house built by local entrepreneur Emily Blagg, who, in a time when the suffragettes were fighting for female independence, managed to carve out a successful career in property development.

Having opened Newark’s first cinema, the Kinema on Baldertongate, in 1913 as well as building The Park and Lime Grove, Blagg made the decision to expand on her small empire and knocked down the Chauntry House to create her vision of the perfect art deco theatre.

Its Neo-Byzantine style was exotic, upmarket and fashionable and from its first screening, a version of King Solomon’s Mines, it quickly became a popular haunt for the residents of Newark.

Blagg was a shrewd businesswoman and, although she opened the Palace as a cinema, she made sure to fit it out with a sizeable stage and orchestra pit to allow for the possibility that the town’s appetite for film might wane. And sure enough, within the year a strong programme of live events was in place.

Since then a slew of famous names have tread the boards at the Palace. Sir Donald Wolfit began his stage career there in 1921 and returned with Miss Marple herself, Margaret Rutherford, and John Clements a decade later. In 1927 prima ballerina Anna Pavlova graced the stage and in 1950 Cliff Richards had Newark rocking away within its walls.

The theatre has given more than entertainment to the town over the years; its spectacular minarets proved the ideal lookout post for spotting fires during the Second World War.

Since then the Palace has gone through many changes but has survived threats of closure thanks to the people of Newark, who’ve rallied on several occasions to save it.

While the cinema is no more, the Theatre continues the tradition of hosting fantastic entertainment and bringing famous names to the town, which in recent years have included Jason Manford, Jimmy Carr, Joan Armatrading, Jason Donovan and more.

To honour a century of being centre stage in Newark and to thank the local community for their lasting support, the Theatre is launching a brand new legacy scheme: The Our Past, Your Future Fund.

Hoping to give back to the fantastic local community, the fund’s aim is to encourage and nurture Newark’s young talent by offering scholarships and funding to local people who aspire to careers in the arts.

The Theatre will be raising money for this through a programme of special events including a fabulous community gala in July, kind donations from the public and through its brand new Sponsor A Seat initiative.

Offering visitors the chance to make their mark on this stunning Theatre’s historic story, this will give patrons the chance to sponsor a seat of their choice for a period of 3, 5 or 10 years, as a gift or for themselves.

Other special events taking place to mark this sparkling centenary include the chance to enjoy afternoon tea on stage followed by a fascinating behind the scenes tour.

There will also be Open Memory Mornings where locals will be invited to share their memories of the Palace, some of which will feature in an exciting exhibition about its history in September. July’s gala will feature local star names alongside dance schools, musicians and entertainers from around Newark.

For more information please visit www.palacenewark.com, pop into the Box Office on Appletongate or phone them on 01636 655755.