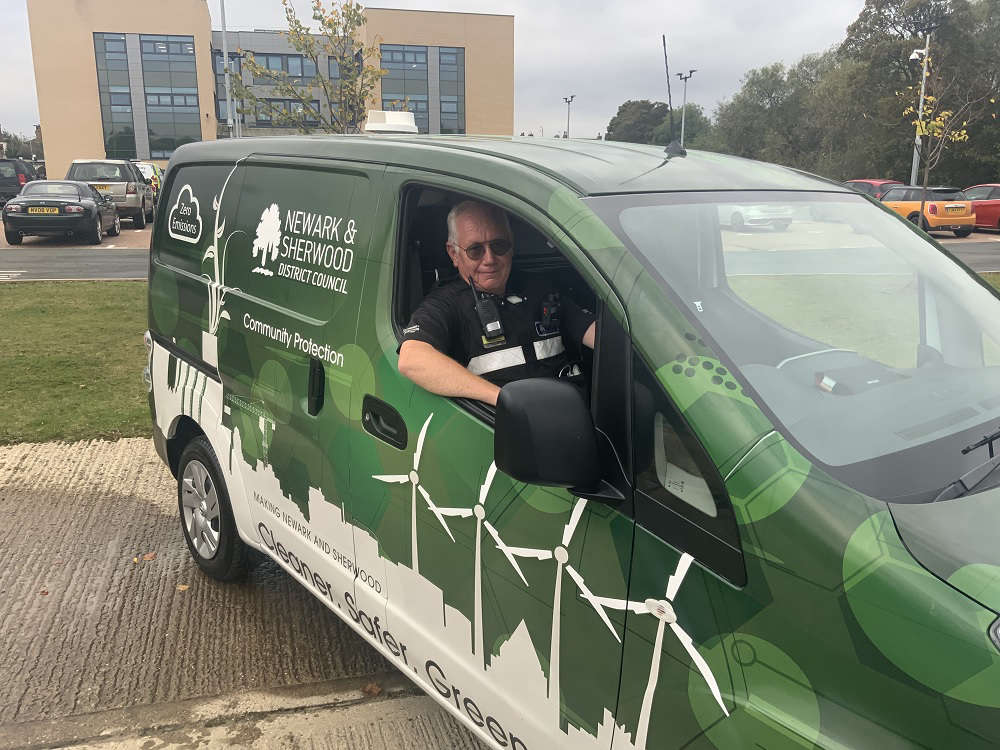 Two new electric vehicles are on the roads in the district after joining the vehicle fleet at Newark and Sherwood District Council.

The vehicles will be used by Community Protection Officers whose job it is to support our police and protect our district from anti-social behaviour, fly-tipping, graffiti and littering for example.

These two new vehicles will form part of a trial by the District Council before hopefully rolling out a full fleet of electric waste collection carts amongst others by 2035.  During the trial, officers will monitor how the vehicles perform, how often they have to be charged and where.

Councillor Roger Jackson, Chairman of Newark and Sherwood District Council’s Leisure and Environment Committee, said: “These vehicles will be used by our Community Protection Officers who go all around Newark and Sherwood district trying to clear and prosecute fly tippers for example. We’ve not been profligate, we’ve replaced vehicles that have come to the end of their life and the advantages are huge producing ‘zero emissions’.

“We said we were always going to invest in electric vehicles and I’m delighted to show that we’ve delivered on the commitments we made to residents."

The vehicles have replaced two other vehicles which have come to the end of their useful life and their introduction to the Council forms as part of a larger project about how it considers the future of their Brunel Drive Depo and the sites ability to meet the requirements in the future.

The District Council is hopeful that as part of the National Waste and Resources Strategy, they will be collecting more waste streams in the future. If this is the case, there will be a need to store more waste vehicles on site.

This pilot scheme will let the Council know if they need to purchase further electric vehicles that will be potentially stored and charged at the location overnight.

It’s not the only thing the Council are doing to encourage electric vehicle usage. Eight new Electric Vehicle (EV) charge points are currently being installed in public car parks across Newark and Southwell. These will be operational in autumn 2021, with an interim target of 15 for the District.

The District Council has also recently increased the number of enforcement officers across the district. An additional 185 hours of feet each week are pounding the streets ready to issue fixed penalty notices to those who commit environmental offences in the district. We will do whatever it takes to fine offenders and deter anyone from dropping litter, fly-tipping, spraying graffiti or failing to pick up after their dogs.

Anyone can report environmental crimes such as fly-tips, littering, dog fouling or graffiti online using the Newark and Sherwood District Council website or by calling the District Council on 01636 650 000.