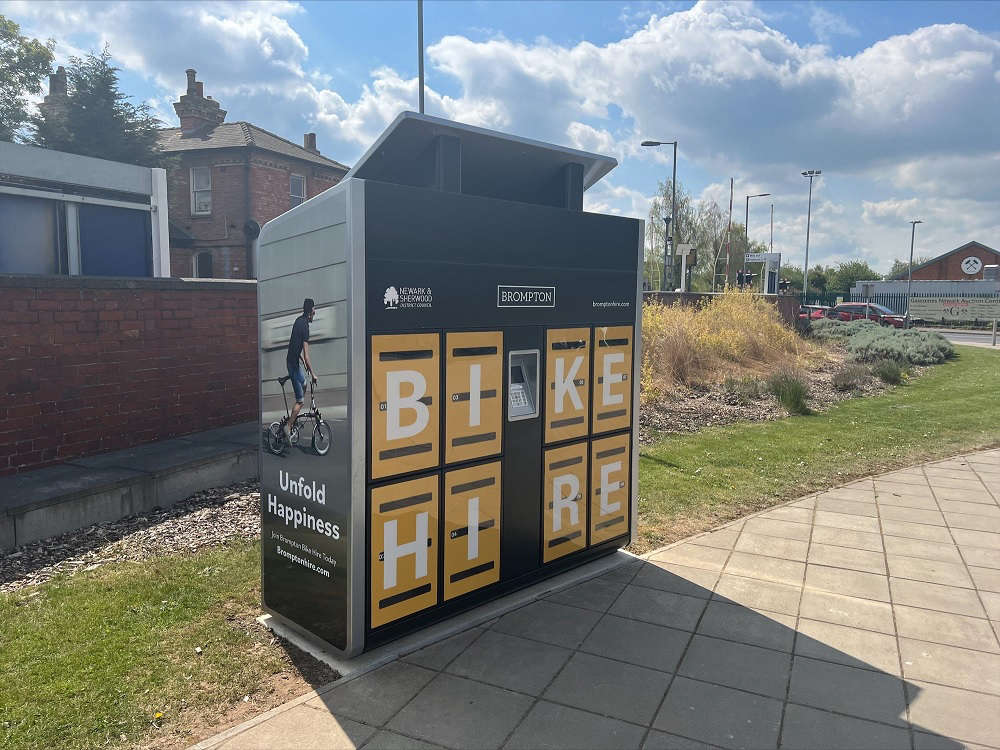 The first of four Brompton bike docking stations has been installed at Castle Station in Newark, signalling the beginning of an enhanced cycling offer in the town.

Once fully operational, the dock will hold 8 Brompton folding bicycles and residents will be able to book out the bikes via the Brompton bike hire app available on the Apple and Google store. Once downloaded, residents need to select their membership and have their ID at the ready. They can reserve a bike a day in advance to travel for 24 hours or keep the bike for up to 30 days.

At the end of the rental period, residents can simply drop the bike off at the docks. Bikes are simple to unfold and can be placed easily on trains and in offices, even under desks.

The installation forms part of one of Newark and Sherwood District Council’s nine priority projects using the £25m Towns Fund deal secured with central Government, which was developed to help increase prosperity and economic growth in towns across the UK. The ’20 Minute Cycle Town’ project links to wider sustainable and active travel ambitions and seeks to make cycling an easier, more affordable option for Newark residents and workers.

Councillor David Lloyd, Leader of Newark and Sherwood District Council, said: “Newark really can be a cycling town once again and the benefits of being one is clear to see. Not only does cycling improve our own health and wellbeing, but it also reduces carbon emissions that we produce, keeps cars off the road decreasing traffic congestion and is considerably cheaper than driving.

“The town has everything it needs for this to be a success, most facilities are in close proximity of each other and Census data from 2011 showed that 9% of the town’s population already rely heavily on bicycles as a means of transport. This is why we have already upgraded secure bike parking facilities in the town centre.

“Brompton bikes are great value and are used across the country in cities such as Oxford, Manchester, Birmingham and London. It’s exciting to be part of this group and we’re the first town or city to install the bikes in the East Midlands!”

Other cycling hubs are planned for further strategic locations in the town. The bus station will be getting its own cycling station in May with two more at Northgate train station and Middlebeck being installed in the summer. Some employers are also showing an interest in hosting docking stations.

CEO of Brompton, Will Butler-Adams OBE, said: “We are really excited to launching our Brompton Bike Hire service here in Newark – our first in the East Midlands region. At Brompton, our purpose is to create urban freedom for happier lives and the new dock in Newark plays a small part in making that a reality.

“With Newark having direct rail links to Nottingham and London Kings Cross, the bikes can be hired and used as part of a commute and the inclusion of free hire memberships for local residents, means they can whizz around the town quickly and easily, and hopefully, providing a bit of fun along the way”.