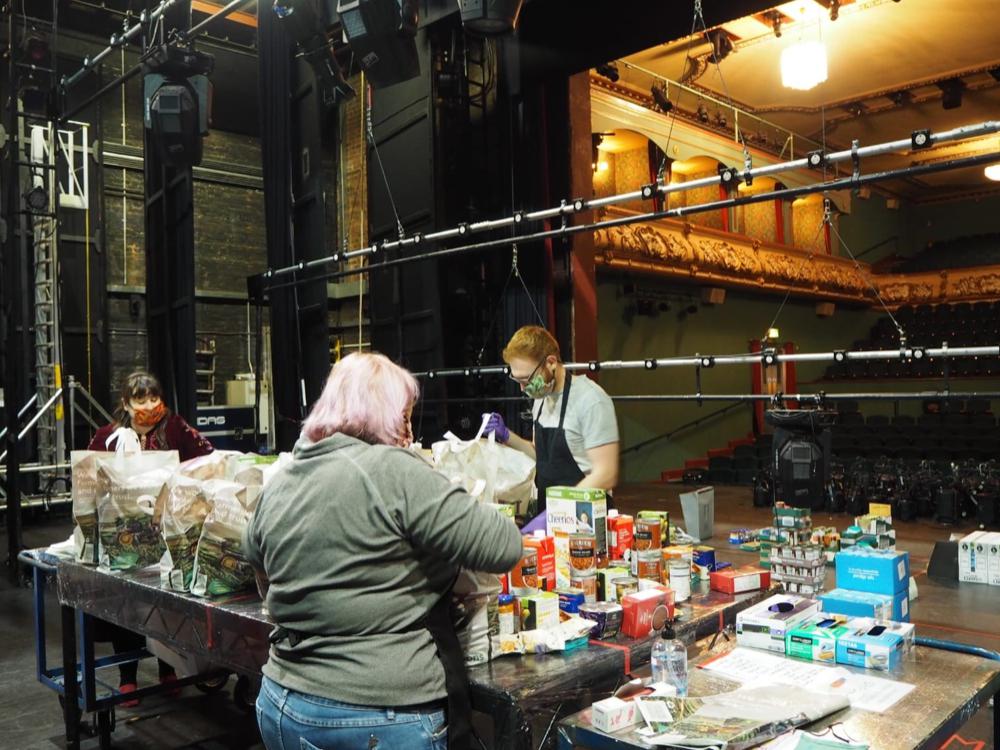 The Palace Theatre stage in use as a sorting area for a food bank.

The Palace Theatre Newark has been at the heart of Newark’s community for 100 years, and during the pandemic has changed what it does radically to provide a vital service to local people.

Since the outbreak of the COVID-19 pandemic in March, the Palace Theatre’s stage has been full, not of performers, but of bags of pasta, cans of soup and more.

Staff at the Palace Theatre, usually more accustomed to managing a packed auditorium, have been working alongside Newark and Sherwood’s Humanitarian Assistance Response Team (HART) to get essential food parcels to those isolating during the pandemic.

HART was set up in March 2020 as our front-line response to support vulnerable and isolated residents during the pandemic.

The HART team is made up of redeployed Newark and Sherwood District Council officers. From 16thMarch 2020 until 23rd September 2020, HART have responded to 910 requests for assistance across the district, with around 20% of these requests (180) resulting in delivery of an urgent food parcel. HART have been supporting with requests ranging from collecting prescriptions and medication to undertaking well-being visits.

The team at the Palace Theatre, with support from HART, have hosted a hub for food deliveries and have packed up food parcels for families and individuals who were isolated or vulnerable.

Instead of their usual work, preparing for shows and welcoming audiences, they have been busy co-ordinating donations from local supermarkets. HART officers then distributed these within Newark and Sherwood. A huge amount of support during lockdown was also provided by a large number of community groups who offered a befriending, shopping or even dog walking service.

Councillor David Lloyd, Leader of Newark and Sherwood District Council, said: “Whilst it’s not the way the Palace Theatre team had planned to celebrate its Centenary year, it’s important to acknowledge that the theatre‘s journey over this year will continue to be a story told for the next 100 years.”

“The enormous effort of the HART and Palace Theatre colleagues has meant that the most vulnerable in the community have had the support they needed for the past six months.”

He continued, “It is also important to remember that the HART support has not stopped, it is still in operation and, if anyone is self-isolating or needs help in the future, they must still call the Nottinghamshire Coronavirus Community Support Hub where enquiries will be triaged and dealt with by the best placed group, which could be our Newark and Sherwood District Council’s HART team.”

Now, after an unusual seven months, the Palace Theatre will say goodbye to the large food hub that occupied the stage.  Many of the remaining supplies have now been delivered to local organisations including Newark Women’s Aid and Newark Foodbank whilst some remain for those that require support.

Lesley Marshall, Newark Foodbank Manager, said: “The people of Newark have always been generous and we’ve been amazed at how they’ve helped. We’ve had so many great calls from people and the support from places like Newark and Sherwood District Council and the Palace Theatre has been incredible.”

If you are vulnerable and/or are struggling with accessing food, then please email the hub at enquiries@nottscc.gov.uk. Your enquiry will be triaged by Nottinghamshire County Council and passed to the best team to help you get the support you need.