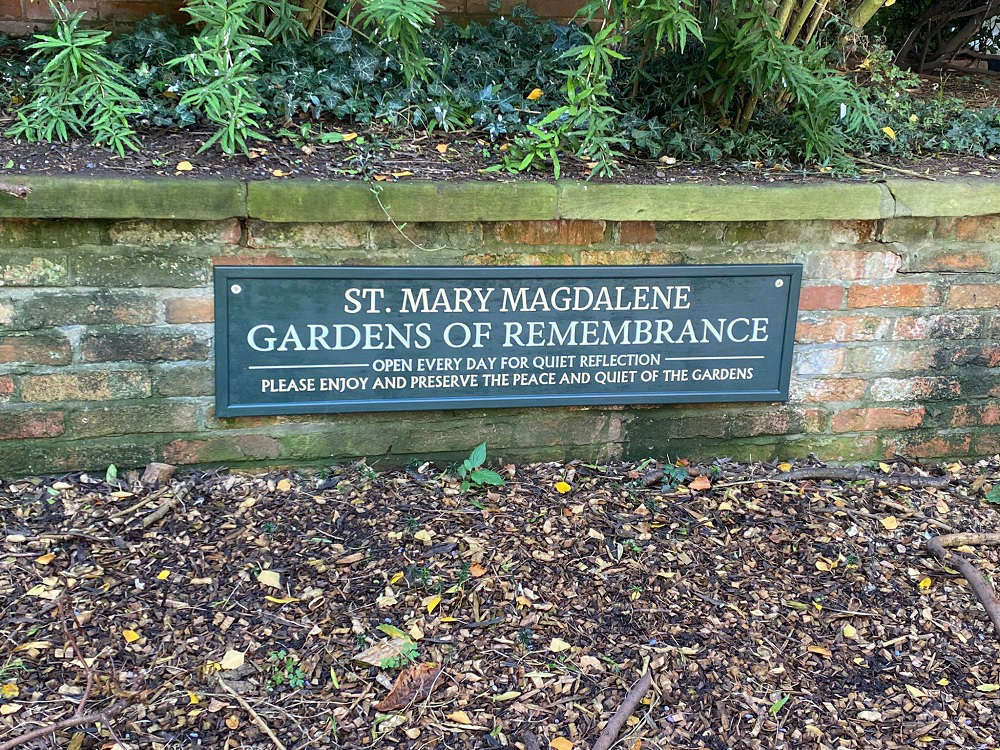 A KIND-HEARTED sign maker, horrified by an act of mindless vandalism, has replaced wooden church signage at no cost, after one of the wooden signs in St Mary’s Church Gardens of Remembrance in Newark was torn off its post.

Newark and Sherwood District Council, which maintains the gardens and provides the signage, originally installed the wooden signs with painted lettering, in keeping with the historic conservation area in the town centre.

The act was described as “appalling” by the District Council, which issued an appeal for information to track down the perpetrators.

Having read about the vandalism on social media, local signmaker Jay Chapman, who produced the original signs, got in touch with the District Council and offered to replace the bespoke wooden signage at no cost.

“I felt gutted when I saw the picture of the vandalism, so I got straight in touch with the Council to say I would replace it at no cost,” he said.

“The sign is handmade from exterior ply, painted up to a finish in Exterior Farrow and Ball Eggshell Studio Green, then pounced in chalk for the outline of the letters before being traditionally hand painted in the colours specified – all in one shot enamels.”

The District Council maintains the church gardens and recently partnered with volunteers from the Newark in Bloom group to revamp the flower borders and tidy the grounds ready for the autumn. New sustainable herbaceous perennials and bulbs were planted ready for the spring and a flower bed was cleared ready for two memorial trees to be planted.

To help combat anti-social behaviour, the District Council also trimmed back a hedge in the gardens to help increase visibility and removed any litter. New historical interpretation signage is being added and the Victorian style lamp posts surrounding the gardens are going be re-painted.

During the spring, two new bug hotels created by Collingham Men in Sheds were added to help with biodiversity and to encourage wildlife and the Victorian style lamp posts surrounding the gardens were re-painted.

Newark and Sherwood District Council Leader, Councillor David Lloyd, said: "We were absolutely overwhelmed by Jay’s kind offer to replace the signage at the church gardens. There really is no excuse for the small minority who indulge themselves causing such appalling damage and destruction like we saw with the original sign – so in any case, it’s a real shame that it had to be replaced at all.

“However, we are immensely grateful for Jay’s offer and we’re delighted to have the new signage back up in the memorial gardens.