Chambers at the Double 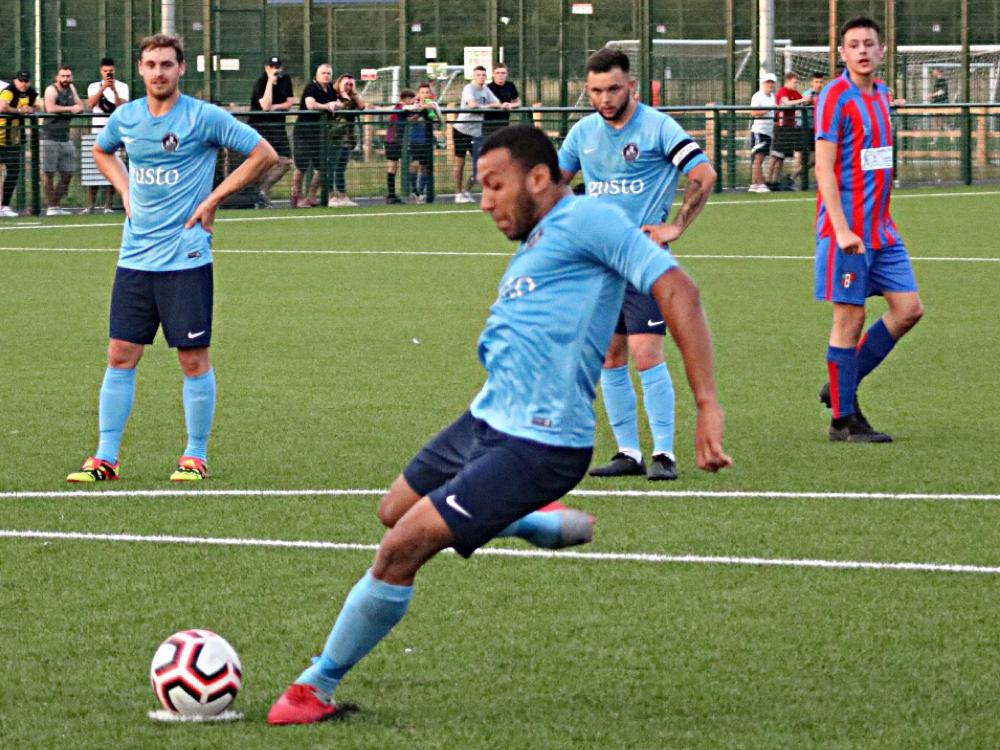 Lewis Chambers in action from earlier in the seasn

It’s ashes for Phoenix as Town get all three points

Two sharp finishes from Lewis Chambers plus a long-range effort from Craig Bridge saw Town secure another three points and keep their noses in front of Dinnington Town at the top of the CMFL North Division Table writes Jim Todd. Un-availability again meant that the team showed five changes from the side which had put 10 gols past Dronfield Town Reserves in the previous game and included a first start for the former Grantham Town and Newark Flowserve stalwart Rhys Lewis who had been signed during the week.

Phoenix gave an early indication of their positive approach as they went close with a shot over the bar following a cross from the left. Craig Bridge put Lewis Chambers through in the 8th minute but his cross was blocked. After Phoenix again shot over the bar from the edge of the area Chambers hit a post after being put clear by Jawanza Grant. Phoenix then beat the offside trap in the 15thminute which saw keeper Nathan Burroughs in action for the first time as he made a good save to prevent Phoenix taking the lead. Town finally got the goal they had been threatening in the 20thminute when Rhys Lewis won a header deep inside the Phoenix half which saw Craig Bridge hammer a 25 yarder into the roof of the net as the Phoenix keeper back pedalled. He again then went close two minutes later as his lob was tipped over the bar. Phoenix came close to equalising in the 29th minute when, following another good cross, a header hit the bar before the Town defence were able to clear their lines. They continued to press for an equaliser in the 10 minutes up to half time with dangerous crosses from both flanks, but their finishing did not match their approach work. Town finally got some breathing space in the 43rd minutes as Lewis Chambers broke clear to finish in the corner to see Town go in two up at the interval.

The second half started in similar vein to the end of the first with Phoenix again showing some good approach work but without demonstrating much finishing power. Lewis Chambers had a shot turned around the post by the visiting keeper in the 66th minute after a strong break by Arron Martin and was again denied in the 71st minute as his shot was diverted for a corner. Town increased their lead in the 83rd minute when Chambers slotted home after a break by George Asplin had seen the latter drive into the Phoenix Area before squaring the ball. Phoenix continued to push forward in the latter stages of the half but two good saves from Burroughs and some determined defending saw Town safely to another clean sheet and three points based around a disciplined and hardworking performance.

Man of the Match - Lewis Chambers