Collingham rise to the occasion

The eagerly awaited return to Station Road resulted in a share of the points for the Blues, which wasn’t the outcome some of the Town faithful were forecasting at 7.45pm, as a youthful Collingham outfit rose to the occasion to claim a well-deserved point in front of a bumper crowd of 190.

Town gave a debut to Liam Moran who became the fifth player in as many matches to occupy the number 2 shirt, while Daryl Price was included on the subs bench, his first appearance in a Town shirt for five years.

The first quarter of the game proved to be almost incident-free with Newark having a couple of shots which threatened the nearby houses more than the goal and it wasn’t until the 29th minute that either goalkeeper was called into serious action, Nathan Burrows getting down well to smother a shot from JakeMorrison. At the other end an under pressure Oliver Swaby had to stretch to clutch a Lewis Chambers lob, before Kieran Job screwed a shot wide of the far post. As half time approached a left wing corner was returned to George Asplin, whose cross narrowly eluded the diving Steve Carty. There had been little to choose between the two sides in an even first forty-five minutes. 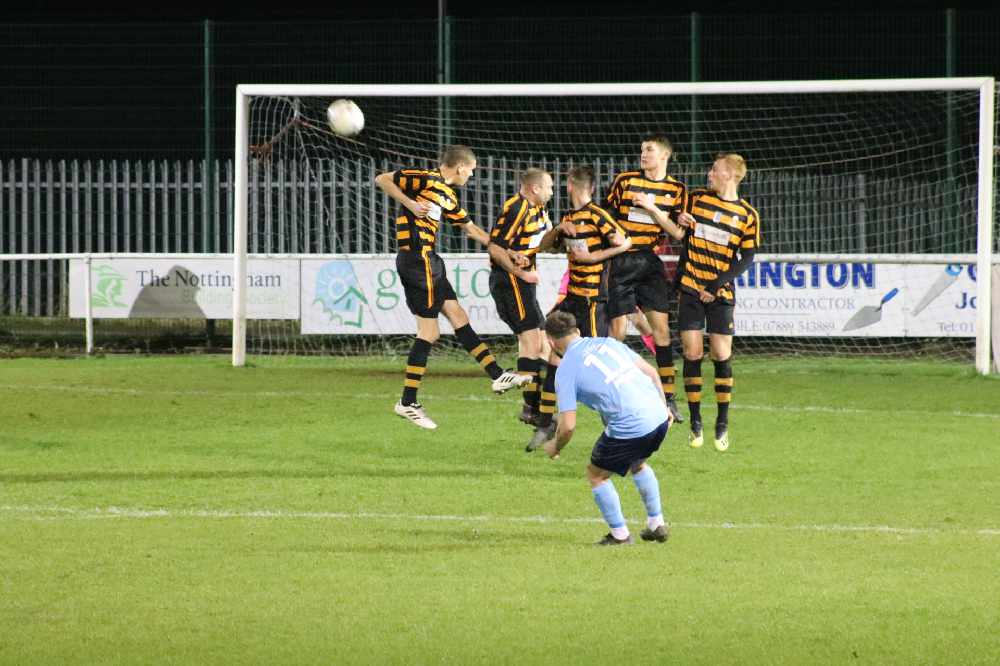 Rhys Lewis, who suffered a back injury in the first half, was replaced by Luke Parsons at the interval. Newark came close to taking the lead within a minute of the restart as Craig Bridge fired goalwards from 25 yards out. Swaby reacted well to push the ball onto the bar from which it bounced back into play, the ball finally pushed wide of the post by Job. A mistake by Jacob Bennett then put Asplin clear but Swaby was again out quickly to snuff out the danger. With play opening out a goal seemed more likely and it was the home side who struck in the 55th minute, a run and cross from the right by Frasier Cooke being turned in by Morrison from close range. The lead lasted for less than two minutes as a speculative high ball in from the right by Moran took a slight deflection to carry the ball away from the keeper and into the far corner of the net. Price replaced Job on the hour as the Blues began to look more positive, although Burrows had to react quickly to save a Chris Self shot with his feet. Newark had a good chance to go in front on 76 minutes as, with the keeper way off his line, a cross field ball from Chambers was tantalisingly close to Price’s head with the goal beckoning. Swaby produced another good block to deny Ricky North in the closing minutes, but in the end a draw was a fair result, Town rarely reaching the levels seen in recent matches while Collingham displayed pace, enthusiasm and no little skill which bodes well for the rest of their season.