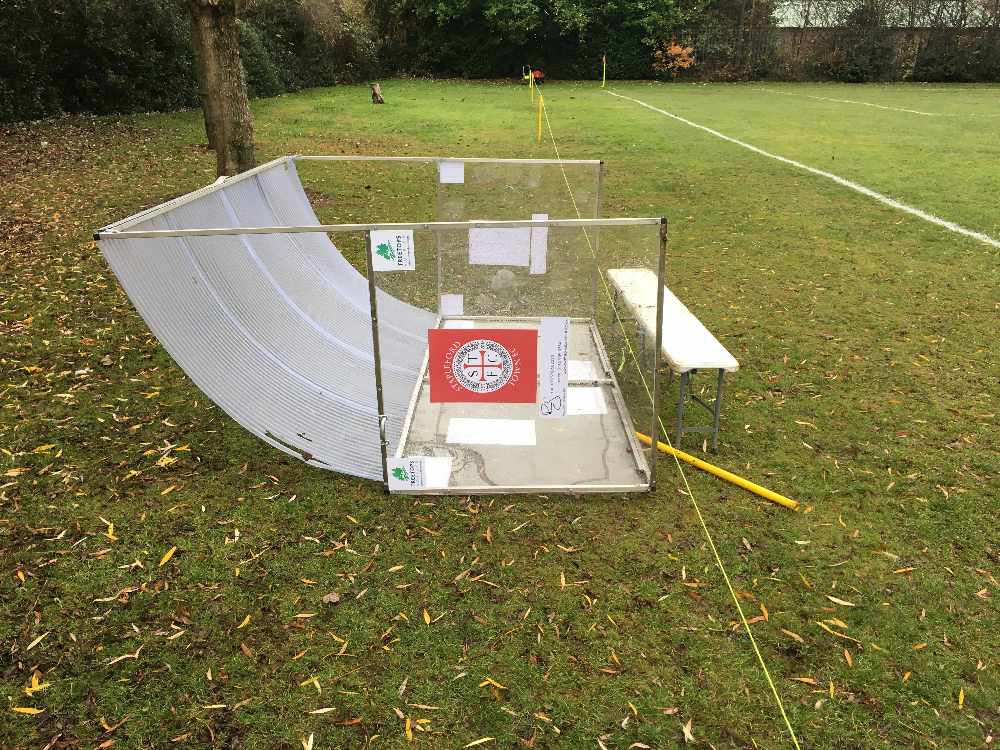 NEWARK FLOWSERVE were literally made to fight all the way to book their place in the fourth round of the Notts Senior Cup with a 3-1 success against Stapleford Town at Hickings Lane Recreation Ground at lunchtime on Saturday.

The County Cup tie, in what is normally a midweek evening competition, was re-arranged to an early kick-off at the weekend by the Notts FA at the request of a Stapleford lacking floodlights.  The re-arranged date and time of the fixture had been agreed by both clubs in advance of the game, and the respective leagues.

At the draw, made live last month on Notts TV, the Stapleford chairman – who was picking out the home teams – announced to the viewers that the tie would be “a feisty one”, and his team didn’t let him down. Notts TV cameras were present, and presumably they will be showing any coverage of the game after the 9pmthreshold.

The facilities were primitive, as witnessed when the visiting dug-out blew over an hour before the game, and before a volatile crowd of 123 gathered.

The bad-tempered game, refereed by a match official who appeared out of his depth at times, was marred in the 75th minute when a mass brawl erupted, forcing both benches on to the field to separate their players. The end result was one yellow card for Stapleford and a red card each, with Will Rawdon making the long walk after reacting to being first headbutted, and then kicked while on the ground.

Flowserve had the ball in the net after just four minutes when latest signing Bradley Wells got the first touch after Rikki Turner could only parry Danny Meadows’ fierce direct free-kick, only for a linesman’s flag to cut short the celebrations.

On the half hour of a game littered with free-kicks, Turner was again called into action as he dived at the feet of Liam Moran to smother an opportunity in the box, but three minutes later the pre-match favourites lived up to their tag when Darryl Price launched a long throw from the right and Meadows had time to control the ball with his chest on the six-yard line and fire home his 12thgoal of the season.

Two minutes later Wells was booked for being brought down in the area, as the officials deemed he had dived.

Then the impressive Junior Rodriguez went close at the other end, after briefly escaping from Ryan Broxholme’s pocket. Less impressively, the Stapleford number nine then handed out a string of threats as the two teams departed to wipe the mud off themselves at the interval.

That man Rodriguez gladdened his team-mates’ hearts yet again with the second period less than a minute old when he hammered home the equaliser, but it was the last positive kick of the game that Stapleford contributed.

Meadows responded by slipping a delightful through ball to skipper for the day Sam Agar on the right, but his pass across the face of goal had just too much on it for Darryl Price to connect with the net gaping.

That same net was bulging on 49 minutes when Wells rose unchallenged to bag his third in two games for the club as he headed home Meadows’ free-kick from the right.

The home side upped their efforts to knock the visitors out of their stride, as predicted by their chairman, but the Highwaymen proved to be made of sterner stuff, with Duracell bunny Jammy Lloyd the standard bearer.

Then came the delay as tempers boiled over, and the referee repeatedly blew his whistle like a countryside station guard lost in the fog, before others took control and calmed the situation.

With two minutes of added time played the referee pointed to the spot after he spotted a handball in the home area, though by that time his decision-making was anybody’s guess.

Agar stepped up to net his seventh of the season from the spot, and his 25thof the campaign, and wrap up a 3-1 victory in a game that will be remembered for all the wrong reasons.

Flowserve return to league business when they visit Eastwood Community in the league at the weekend.

On a brighter note, the East Midlands Counties League top of the table showdown between third-placed Sherwood Colliery and leaders Selston ended in a 2-0 win for the former.

Selston’s first league defeat of the season means that Flowserve are just three points adrift of them, having played the same number of games, and the two meet in a mouth-watering prospect at Lowfields on Saturday December 29.