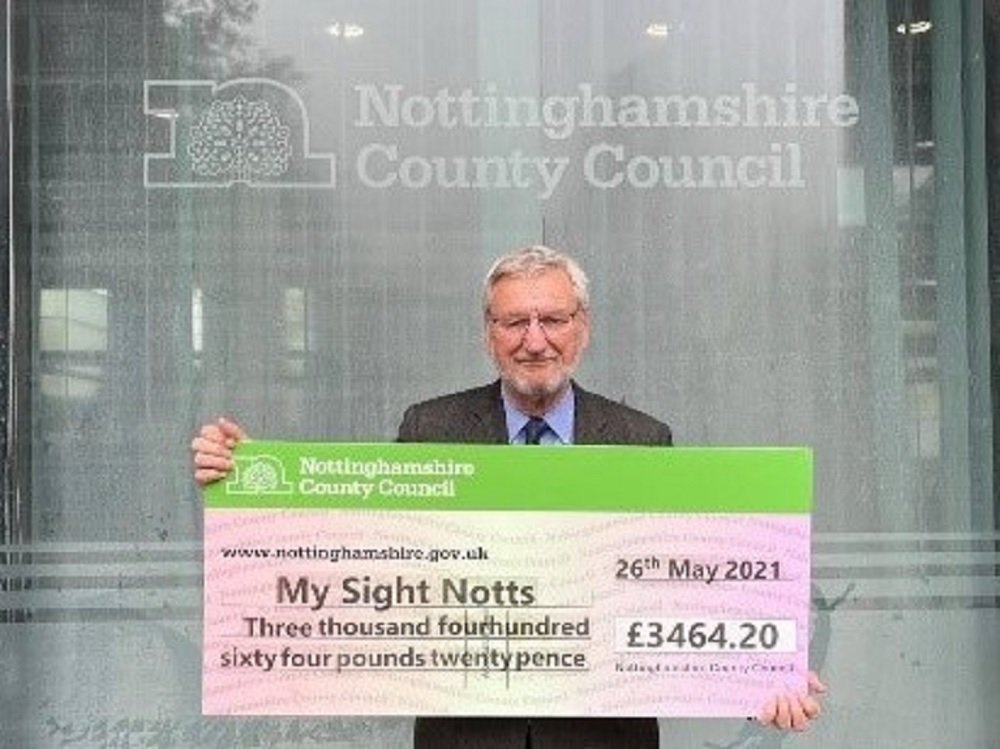 My Sight Nottinghamshire supports the visually impaired community by helping them to live more independently. The charity has been needed more than ever over the past year, as the pandemic has left many people with visual impairments unable to go out and feeling isolated, due to things like being unable to socially distance or read one-way signs.

By offering things like assistive technology to help people to live more independently, and a telephone befriending service to help combat loneliness, My Sight Nottinghamshire’s support has been invaluable to many members of the Nottinghamshire community throughout the last year.

The pandemic has also had an impact on fundraising opportunities due to a lack of events and changing financial situations for those on furlough or facing redundancy. But in a difficult fundraising year, Stuart Wallace was still able to beat his target of £3000 and raised £3,464 for My Sight Nottinghamshire between May 2020-May 2021, thanks to the generosity of Nottinghamshire residents and Council staff.

Stuart said: “I was even more determined to help the charity after I heard of the impacts Covid-19 has had on blind and partially sighted people, leaving them less independent due to being unable to follow social distancing guidelines in some places like shops.

“These issues have left many people with visual impairments unable to leave the house and unable to do the things they normally would be able to do independently.

“I’m extremely grateful to anyone who has donated to my fundraiser for My Sight Notts. It will go directly to help people in our own community and it is such a worthwhile cause.”

From virtual meetings with the charity and video pleas on social media, to reaching out to Councillors and members of the community, Stuart made every effort to do what he could to raise funds for this important cause.

Another huge contributor to the fundraising total was a staff wellbeing challenge for Nottinghamshire County Council staff. Throughout April, 136 Nottinghamshire County Council staff signed up to the wellbeing challenge which consisted of participants tracking their walking, running, or cycling, clocking up 639 miles along the way – with all funds raised going to the Chairman’s chosen charity.

My Sight Nottinghamshire has supported the Chairman’s fundraising campaign from the start. Lydia Fenton, Fundraising Manager for My Sight Nottinghamshire said:
“We would like to thank Stuart Wallace for nominating My Sight Notts as his chosen charity. During a year that’s been difficult for fundraising, with events cancelled and charity shops closed, Stuart has managed to raise an incredible £3,464, beating his target of £ 3,000, which is a real boost for our charity and will make a huge difference to the local blind and partially sighted people we support.

“We’d also like to thank everyone at Nottinghamshire County Council who contributed to the success of the Chairman’s Charity Appeal, those who took part in the staff wellbeing challenge and the New Year recycling pledge campaign together with everyone who organised individual fundraising events or donated to the appeal. Thank you so much for making a difficult year so much better!"

Stuart Wallace finished his time as Chairman at the first Full Council and AGM for the new Nottinghamshire County Council administration on Thursday 27 May, where he formally handed over to the new Chairman, Councillor Mike Quigley MBE.

Find out more about My Sight Nottinghamshire and their current charity raffle: https://www.mysightnotts.org.uk/